Born and raised in Las Vegas, Missy knew early on she wanted to be in the entertainment industry. Right out of high school, Missy got her first dance job at the legendary Aladdin Hotel as a featured dancer in the magic spectacle “AbraCadabra”. Driven by her passion for dance and the entertainment business, Missy burned the candle at both ends performing full time nightly while attending UNLV during the day, where she graduated with a BS in Health Education.

After performing in several other top Las Vegas shows and touring with “New Kids On The Block”, Missy then turned her creative energy to the production side of the entertainment business. Starting out by assisting on corporate trade shows, fashion shows, industrials, and even lounge bands, it didn’t take long before Missy was choreographing full production numbers in Las Vegas’ biggest shows and discovered her true passion and fulfillment was in the behind the scenes creative arena.

As the driving force behind her own company “Missy Cochran Entertainment”, with a client list including “Adobe” and “McDonalds”, her talent as a choreographer, her eye for costuming and her ear for music editing have made here one of the most sought after producing partners from coast to coast and around the world.

Head lighting designer for MJ Live, Josh has an extensive and highly successful background. He has designed, created and engineered lighting for the likes of Snoop Dogg, Grammy award winner Wily Chirino, Pulitzer Prize winning playwright Nelo Cruz and many, many more.

Taking the last decade to tour the country with live shows, concerts, guest performances, and more, Josh has finally returned to Las Vegas to join the MJ Live team. His world class electrifying lighting design is a major contribution to making MJ Live a once in a lifetime live show experience and the number one Michael Jackson show in the world.

MJ Live is privileged to have him and his expertise on site to make the show the success it is! 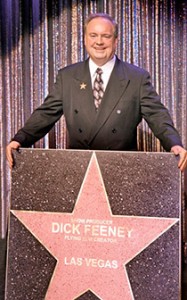 In a career that spans over 40 years, veteran entertainment giant Dick Feeney has produced over 37,000 performances of shows in Las Vegas, major theatrical venues across America and countries around the world. Feeney grew up in the Boston area, in Rockland, Massachusetts, where in June of 2009 he was inducted into the Rockland High School “Academic Hall of Fame”. After years of touring with the highly popular Boston based band the “Lewis & Clark Expedition” Feeney formed his own group “Gemini” and continued developing his talent and skills as a singer, dancer, musician and super showman making him one of the country’s top nightclub entertainers. Producing his first critically acclaimed show in 1981 “Lullaby of Swing” in Honolulu, Hawaii he then successfully toured the production before settling in Las Vegas in 1985 where he opened the long running ‘An Evening at Las Cage” and “Crazy Girls”.

In 1991 Feeney opened “Viva Las Vegas” at the Sands Hotel & Casino. Viva Las Vegas’ run of over 18 years makes it the longest running and most successful afternoon show in Las Vegas history.

Feeney’s latest shows enjoying huge success running full time in Las Vegas and touring the world are the “Rat Pack is Back” in its twentith year, “MJ Live” the #1 Michael Jackson show in the world.

An avid traveler himself, Feeney’s even taken his productions to the sky, as owner of The Flying Elvi skydiving team. The Flying Elvi, who were first featured in the movie “Honeymoon in Vegas,” consists of ten Elvis Presley clad jumpers who skydive into events around the world from altitudes of 5,000 – 12,000 feet, free falling at speeds up to 160 miles an hour.

In October of 2008 Feeney was awarded a star on the prestigious “Las Vegas Walk of Stars” for his outstanding contributions to the Las Vegas community. The star is permanently on display in the sidewalk in front of the Paris Hotel and Casino.

Gene Sironen is an arranger, conductor, composer, multi-instrumentalist, singer and performer, and has been providing music for shows around the world since 1978.