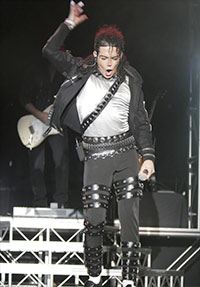 Jalles Franca moved to the United States from Brazil at the age of 16, to fulfill his dreams as a professional dancer in Las Vegas. At the age of 21 he began a seven year residency as a performer, dancer and percussionist at Studio 54 Nightclub at the MGM Hotel & Casino.

A long time fan of the ‘King Of Pop,’ Michael Jackson, Jalles began imitating the star’s signature dance moves during his routines at Studio 54 and various other venues. Soon after the passing of his idol, Jalles began dedicating his talents to pay tribute to the late Superstar. Jalles has won numerous contests for “Best Michael Jackson Impersonator,” Best overall “look” and “Best Moonwalk.” Billing himself as “MJ THE LEGEND” Jalles has thrilled audiences at private and corporate events, festivals and tribute shows throughout Las Vegas, Hollywood, Dubai and more.

MJ Live, the nation’s #1 Michael Jackson tribute show, at the STRAT Hotel is proud to feature the extremely talented Franca as one of its’ star performers and audiences in Las Vegas and in theaters across the country agree with their nightly standing ovations. 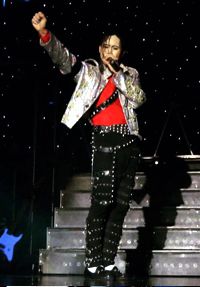 Santana Jackson is one of the top Michael Jackson tribute artists in the world. He has been a dedicated MJ fan since he was six years old and is committed to bringing the magic of Michael Jackson to audiences around the world in tribute to one of the greatest performers of all time. With his shocking resemblance to the King of Pop, electrifying dance moves, and extensive MJ wardrobe, Santana has been thrilling audiences internationally for over 14 years.

Santana gains the most satisfaction from performing to bring smiles and inspiration to others and dedicating himself to the many worthwhile philanthropic events that surround us today. Volunteering his talents for countless hours at charity events, Santana received the prestigious “Entertainer of the Year” award from the national nonprofit “Win Win Entertainment” organization.

He prides himself on being the best example he can to bring happiness to others through Michel Jackson’s music and starring as Michael Jackson in the MJ Live show at the STRAT Hotel in Las Vegas enables him to do so on the grandest of scales.